FROM COBRA TO NEW BABYLON

Constant Nieuwenhuys (Amsterdam 1920 – Utrecht 2005) is one of the most important Dutch artists of the twentieth century. He was one of the founders of Cobra (1948-1951), the international group of artists that brought about a revolution in painting after the Second World War. In the early 1950s he began to make spatial constructions, a precursor to his urban development project New Babylon.

In the early 1950s Constant’s work became more abstract. During this period he also made several pieces of furniture for Spectrum. The most striking result, the IJhorst side tables, are still part of the collection. The tables, designed in 1953, are characteristic of a turning point in Constant’s oeuvre; they mark the transition from his Cobra years to the beginning of his unique and large-scale New Babylon project.

As an artist Constant was socially very involved. Central to his work is the question of how the individual’s need to express himself creatively can lead to social upheavals. In his view, art was not a question of pure beauty but the expression of a deep sense of life. In order to renew himself Constant was looking for a new abstract visual language. In the 1950s he made a large number of constructions that were not only intended as independent sculptures but also as architectural models. Consequently, besides the brush, the soldering iron became his most important tool. At the end of the 1950s, the constructions were incorporated into New Babylon, a design for an imaginary metropolis of the future. Here people would no longer have to work and could fully develop their creativity. 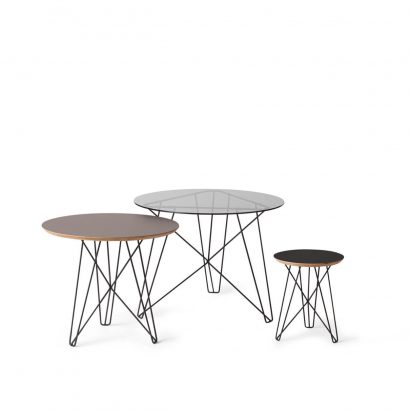