INTERIOR DESIGNER AND DESIGNER OF LIFE

Benno Premsela (Amsterdam, 1920 – 1997), designer and interior designer was a well-known person in the post-war Dutch art world. As a freethinking designer he was praised for his minimalist work in which beauty and functionality are closely linked. He also gained fame as a champion of gay emancipation; from 1962 to 1971 Premsela was COC’s chairman.

In the 1950s, Premsela worked as a stylist at De Bijenkorf, where he created spectacular shop windows. Later, together with Jan Vonk, he ran a renowned design agency that also focused on textile designs.

The mirror that Premsela designed for Spectrum in 1956 is a true interpretation of his minimalist and functional language of form. That Premsela made a few designs for Spectrum is no surprise in hindsight. He knew Martin Visser, chief designer for Spectrum, from his time at De Bijenkorf where both of them worked in the furniture department. And Visser had a nose for attracting talent.

‘Interior design is a serving profession,’ said Premsela about his work. ‘You have to help people solve their problems by formulating them clearly.’ This clear formulation also applies to the utensils he made. This can be seen in his now classic Lotek lamp, but also in the Benno mirror and Lisse planter, both of which he designed for Spectrum. Each of them transparent, no nonsense designs, excelling in austerity. Designs in which the human dimension is pivotal and which illustrate his ideas about less is more. 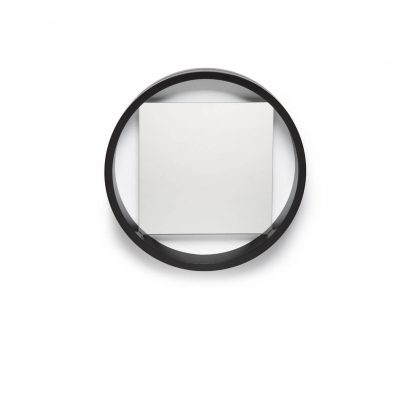